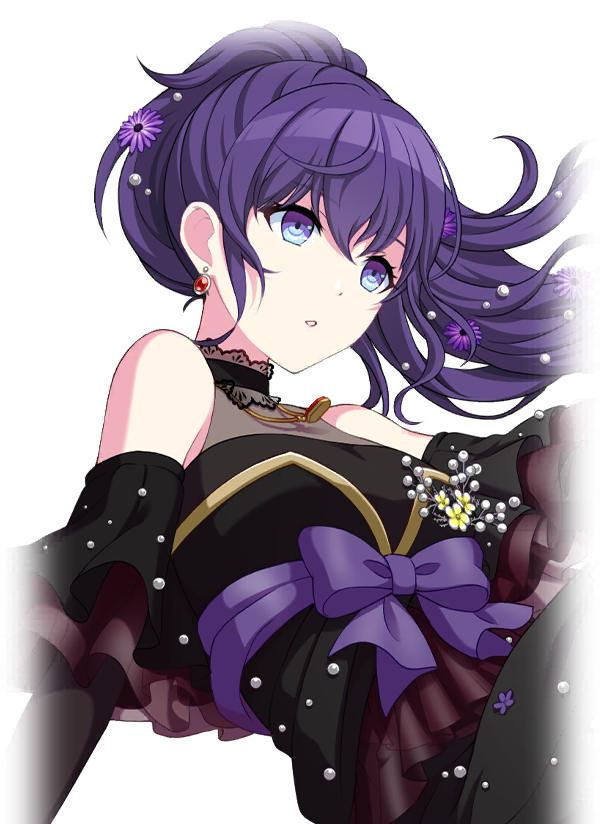 "How nice it must be, for you to have music to call your own..."
―Asahina Mafuyu

The lyricist of Nightcord at 25:00, Mafuyu is good-natured, reliable, considerate and academically talented. She's the only member of the group who attends daytime classes. She seems to have no flaws whatsoever... or is she just putting on a facade?
—Profile
❝
❞

Mafuyu is an honor student and the only one in her circle who regularly attends school. She constantly receives good grades and is a member of the archery club (with Shizuku), as well as the student council. She is said to excel in both academics and sports, hence people often put high hopes for her to excel in everything she does. However, in reality she is heavily burdened and pressured by her peers' and her parents' (especially her mother's) expectations of her, who have pushed her to do what they want and think is the best for Mafuyu instead of letting her pursue her own dreams. Aside from her lost sense of self, she lost the ability to properly taste and enjoy food in middle school.

Mafuyu has dark purple hair with eyes that start at purple and fade to light blue from top to bottom. Her hair is curly, long, and usually kept up in a ponytail that falls over her right shoulder, though not always. Mafuyu’s fringe is fairly long as well, with the middle section falling past her eyes. She has an ahoge that swoops to the right above her fringe, and her face is framed by short, curly strands on each side. Her ponytail is held in an orange hair tie.

While Mafuyu’s eyes are usually wide and bright, they will occasionally lose all light and go dead when she is honest with her feelings. This happens most often when the 25-ji, Nightcord de. members meet her in the Empty SEKAI.

Mafuyu’s unit outfit is a stylized school uniform, and differs from her Miyamasuzaka Girls’ Academy uniform. It is grey, with long sleeves that fade to black and tipped with grey frills. Her collar is black, outlined in grey, and her butterfly ribbon consists of two ribbons, one black and one blue, tied at the middle. Her choker is black, with a gold charm. Mafuyu’s skirt is long and grey, with two stripes of black near the bottom, and it is covered by two semi-transparent pieces of fabric. The skirt grows longer at the back of the outfit. Her black shoes are heeled, as shown in her 3D model.

Her regular school uniform is a lighter shade of grey, with a red butterfly ribbon. Its collar is white with grey stripes. She wears a grey jumper, the shade of grey similar to that of her unit outfit, and her skirt is the same light grey as her shirt. She wears long black stockings.

Mafuyu is admired for her smarts, athleticism, and the humble sincerity she shows that keeps any praise for these talents out of her own mouth. She is known to be kind, generous, and considerate, her words always polite and her voice soft and warm. She is difficult, arguably impossible, to anger, for any hesitation she shows that might betray disagreement or displeasure is immediately covered with a gentle "smile". She is someone whom others are not afraid to rely on, and someone whom others often put high hopes on, knowing that she has met expectations before and will continue to do so.

To everyone else, Mafuyu is a "good girl." However, to herself and behind the mask, she lacks emotion, empathy and apathy; abandoned by her true self a long time ago, she is desperately searching to find herself once again. Mafuyu’s "true personality" - or, at the very least, the person she is when there is no one else watching - is considerably more cold and blunt. Her voice is dull and her face is flat, both holding no feeling for she has none to show. She speaks few words, and the words she does speak tend to be no more than what is needed. The polite consideration she is expected to have, that colors the sentences she crafts for others, is nowhere to be heard. While she is not pleasant or "good," she is honest - as honest as she has the capacity for. It’s only within her cold honesty are her true feelings, her true self, given the slightest chance to show themselves, and the other members of 25-ji, Nightcord de. recognize this in their willingness to offer a space where she can be "rehabilitated."

After the incident in the Empty SEKAI, as well as the doll exhibit, Mafuyu is encouraged to say what she is truly feeling—or, at least, to try—as long as she is talking to the Nightcord members. To be whoever she feels she is in that very moment, to the best of her ability, and this allows Mafuyu the opportunity to see what it’s like to exist in a space without pressures of what she should and should not do. She no longer assumes the expectation of her warm, gentle voice from the outside world, and instead forgoes pleasant smalltalk for short, flat responses when she is spoken to, seldom speaking herself. She rarely states her opinions, as she doesn’t have many to give, rarely making any decisions of her own, instead saying that she "doesn’t know" or "doesn’t mind." However, the coldness or the disinterest of her words are not an act to push others away or be cruel, but an honest admission of the fact that Mafuyu genuinely does not know. The response happens when is genuinely responding to how she feels, and while she can recognize her feelings, she does not know how to assign them. During the last chapter of the marionette event, Mafuyu’s voice is flat and dull as she questions Ena about her drawings, but her interest is genuine as she accepts the information, and her following questions indicate that she has honestly cared enough to actually listen and learn.

A list of characters Mafuyu interacts with in the game.

Yoisaki Kanade: Fellow circle member. Mafuyu is amazed that Kanade was able to make the song that made Mafuyu smile during Carnation Recollection, encouraging Kanade to keep trying to make Mafuyu feel something. Kanade truly cares about Mafuyu as much as Mafuyu cares for her.

Shinonome Ena: Fellow circle member. Mafuyu thinks that she is really passionate about art. Although they initially had a rocky relationship, the two come to understand each others' struggles and start respecting each other more as time goes on. It is also thanks to Mafuyu's words in Insatiable Pale Color that Ena snapped out of her state, returned to the real world and kept on drawing. In Ena's Birthday card, Mafuyu tells her she appreciates Ena saying things straight out rather than sugar coating her words.

Akiyama Mizuki: Fellow circle member. Mafuyu thinks they're overly obsessed with cuteness, while Mizuki thinks that what Mafuyu is going through feels personal to them due to both dealing with issues regarding their identities. Mizuki also feels a bit envious seeing Mafuyu doing her best to try find herself and not giving up, while Mizuki is intent on not telling their secret to anyone.

Hoshino Ichika: An underclassman. Ichika idolizes and cares for Mafuyu and wishes to interact with her more. She talked with her in Intersecting Melodies, Glowing Warmth and gifted her Miku cookies during Mafuyu's birthday.

Hinomori Shizuku: Fellow archery club member, the two get along well. Although Mafuyu keeps her "good girl" mask on around Shizuku, she also treats the latter like a normal person. She also accepted the birthday gift Shizuku gave to her.

Otori Emu: An underclassman she got paired with for the 3-legged race during the sports festival. Emu is scared of her, though Mafuyu doesn't seem to realize this or understand why. In her 3* card story, she admits that she was intrigued by Emu because her scared reactions towards her felt "new" and "different."[2]

Mafuyu is featured in the SEKAI version or has an alternate vocal of the following songs: