New rule on Headcanons have been made! The wiki will use continue to use they/them for Mizuki until further confirmation.
For in depth see here! 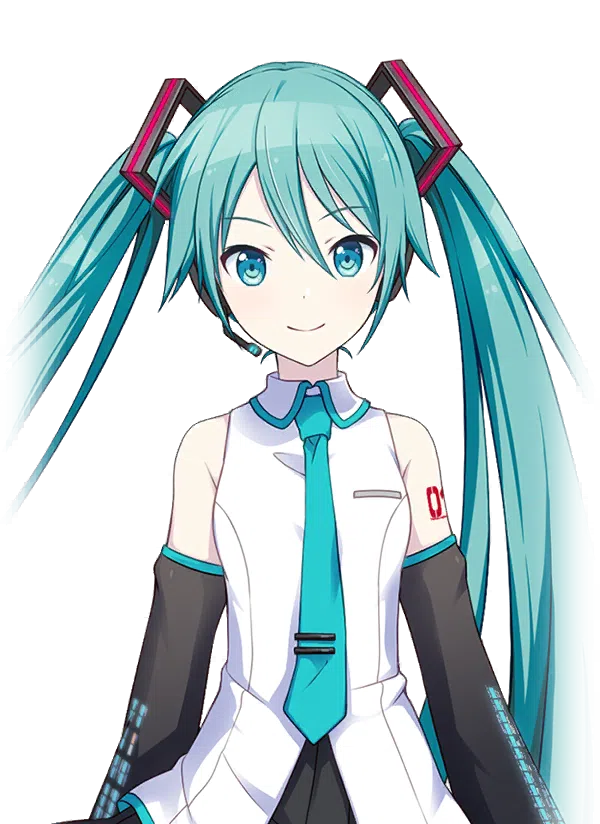 Hatsune Miku is a VIRTUAL SINGER. She assists all the existing units.

Hatsune Miku (初音ミク) is a female VIRTUAL SINGER known for her blue-green twin-tail hairstyle. She can sing in a wide variety of genres with her cheerful and cute voice. Among virtual singers, her name is known throughout the world and through many generations.[1]

She lives in another world called SEKAI, but appears in the real world along with her fellow Virtual Singers to consult people who have trouble understanding their true feelings through music.

In Leo/need's SEKAI, the School SEKAI, she is a student, who, with Luka, helps the girls reconcile. She hopes to be a good senpai to Ichika and the others and respects Luka, often trying to copy her mature personality.

In MORE MORE JUMP!'s SEKAI, the Stage SEKAI, she becomes an idol together with Rin and guides the idol group into realizing their true feelings on stage. She is light, peppy, and mature; Rin looks up to her as an idol.

In Vivid BAD SQUAD's SEKAI, the Street SEKAI, she and DJ Len help MEIKO run the Crase Café. They serve as advisers to Kohane and her friends. She is calm and sassy, often teasing Len on how childish he is.

In Wonderlands x Showtime's SEKAI, the Wonderland SEKAI, she works with the troupe leader, KAITO, and puts on extravagant shows with the plushies. She, like Emu, is cheerful, bright, and sometimes speaks in onomatopoeia. She aims to bring a smile to everyone's faces through performances.

In 25-ji, Nightcord de.'s SEKAI, the Empty SEKAI, her appearance and personality are somewhat different. Initially, as the group's sole Virtual Singer, she comforts its members and helps to resolve their problems. She is much more mellow, and has a particularly close relationship with Mafuyu; motivating the other group members to help Mafuyu recognize her true feelings.

Miku's appearance is modeled after her V4X design drawn by the artist iXima. She has turquoise eyes and pigtails that extend down to her shins held with black and red square-shaped clips. She wears a sleeveless, white collared blouse with teal trims. Her tie is teal with a grey tie clip. She has a red '01' tattoo on her left shoulder and wears dark grey detached sleeves with a teal trim that become translucent at the top and fan out near the wrists. She wears a grey thigh length skirt with teal trim and thigh-high socks that blend into her shoes, also with teal trims. Her design is mainly inspired by Yamaha synthesizers and keyboards.

In the School SEKAI, her pigtails are shorter, messier, and of a darker teal color with vibrant pink highlights. She wears a hairpin shaped like a safety in her bangs, which are pulled to the right. Her school uniform is black with a white trim and is accessorized with a safety pin and a dark pink bow. Her sleeves are rolled up, exposing the dark pink plaid pattern under them, matching the plaid ruffled bands held together with gold buckles she wears on her wrists. She wears a black pleated skirt with dark pink plaid ruffles on the sides and a black lace border. Her skirt is held up by two loose belts. Miku wears black and white sneakers on her feet, as well as thigh-high black socks.

In the Stage SEKAI, she wears an outfit similar to her bandmates. Her cyan pigtails are waist-length and thin out at the ends. She wears two ribbons in her right pigtail, a black one patterned with stars and a white one patterned with diamonds, and her left pigtail is tied with a cone-shaped hair tie. Her dress is white with a heart-shaped neckline and a detached collar, where she wears a golden star-shaped pendant. Her skirt is ruffled, with black, teal, white, and checkered lace exposed under the ruffled sides. The collar of her sleeveless dress has a black and white diamond pattern with teal lace borders. Her vest has golden star-shaped buttons on each side, connected with thin chains. She wears a large white ribbon tied around her back that flows down to her knees, exposing the star pattern inside them. On her leg, she wears a white leg band with the numbers '01' in red, mimicking her usual arm tattoo. Her shoes are white high-heeled boots with red buttons that reach her mid-shin.

In the Street SEKAI, her hair is a lighter teal and tied up into buns with wavy pigtails extending down to her waist. She wears a black hoodie with bright pink details and a blue hood. The shoulders of the hoodie are semi-transparent and feature white paint splatters, along with the word 'FANTASTIC' written across the middle. Her hoodie is left unzipped, exposing a white shirt with a heart-shaped neckline under it. Her skirt is dark blue with white stripes and folds into a point on both sides. Her underskirt is white and ruffled. She wears black and white sneakers, paired with full-length black tights. She wears gold hoop earrings and a black choker with a small chain hanging from it.

In the Wonderland SEKAI, her eyes are teal with sparkles as her pupils and fanged teeth. Her bright blue waist-length pigtails are thin and held together at the ends with pom-poms. Her ahoge is shaped like a heart and has another pom-pom attached to it. She has red cat ears and a striped pink tail, however, it is unclear whether they are real or not. She wears a short-sleeved red striped dress with a scalloped gold hemline and pom-poms as the cuffs. The collar of her dress circles the back of her head, with pom-poms decorating the edge and a large red ribbon under her neck. There are multiple star-shaped cutouts on her dress, revealing an underskirt with green, pink, and purple polka dot frills. Under her dress, she wears red frilly bloomers accessorized with multi-colored pom-poms. Tied at her back is a large gold ribbon that reaches her knees. The inside of the ribbon is patterned with red stars. She wears pink thigh-high socks accessorized with red ribbons and red flats with star-shaped openings.

In the Empty SEKAI, Miku has long, messy, uneven, warm grey pigtails that fall down to her knees and gradually fade into a dark, colder grey at the bottom. The pigtails are held up by off-white bows, though the right one is falling down. She has heterochromia; her right eye is turquoise, while her left eye is pink. She wears a white, long-sleeved collared blouse with buttons that go all the way down to the bottom, with 3 buttons unbuttoned at the end to reveal a petticoat. The dress is thigh length and turns gray towards the bottom, either by design or from dirt. Around her neck she wears a thin red bow and her nails are painted turquoise. She wears a black harness across her chest. On her right leg, she wears a dark grey sock with no shoe, and her left leg and foot is left bare. Her voice is noticeably more monotone than the other versions of Miku.

Margarita Blankenheim, the character Miku plays, is a young girl with lightless, turquoise eyes, pale skin, and a stoic face. Like her Niigo counterpart, her eye shape is much narrower, though her hair is neatly patted-and-curled down, tied in thick twin tails that reach her knees. Margarita's voice is much duller than what would be expected of the Japanese pop star.

She wears a light blue ball gown, the top ending in long lace of a lighter color. Her sleeves are detached and left open at the shoulders, tied in with a blue ribbon and bunched up at her elbow, finally being let free at the ends with sharp, hanging sleeves. Located by her heart rests a powder blue broach in the shape of a rose with baby blue frills acting as leaves.

Miku is either featured in or has an alternate vocal of the following songs: