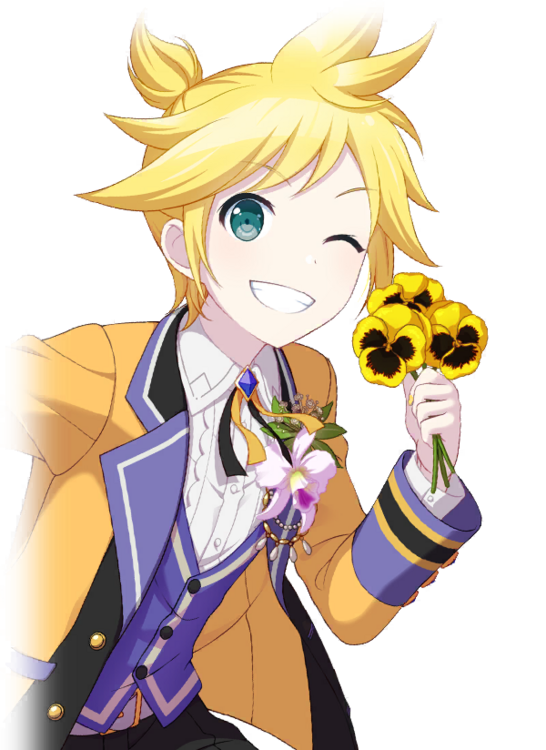 Original CV by Shimoda Asami
Kagamine Len is a virtual singer. He advises Vivid BAD SQUAD in the Street Sekai, though he also appears in Wonderlands x Showtime area conversations by default.

Kagamine Rin's male counterpart, he keeps his short blonde hair tied back in a tiny ponytail. His boyish voice has a power and firmness to it, but can also excellently convey a wide range of emotions.
—Profile
❝
❞

Kagamine Len (鏡音レン) appears in the real world as a Virtual Singer, but when young people have trouble understanding their true feelings, Len and his fellow Virtual Singers appear in another world called SEKAI to help them.

In Vivid BAD SQUAD's SEKAI, the Street SEKAI, he is a DJ in training and sings in as a unit with Rin. He helps run the Crase Café, alongside MEIKO and Miku. He is often seen as childish due to his attempts to act mature, one of many examples being him ordering items such as black coffee or coffee jelly on MEIKO's café menu.

In Wonderlands x Showtime's SEKAI, the Wonderland SEKAI, Len is young and bright, often involving himself in Miku and Emu's recurring shenanigans. He is an actor-in-training, who tends to ask Rui, Tsukasa and KAITO for advice. He greatly respects KAITO and his acting prowess.

In MORE MORE JUMP!'s SEKAI, the Stage SEKAI, he appears as a cool and gentle idol. He is likened to Haruka in that they both have great "idol power". He also seems to be fond of surprises, as he enjoys setting up a show to perform for the others by leaving calling cards around the area.

In Leo/need's SEKAI, the School SEKAI, he is part of Miku's band as a guitar player. He is confident in his skills, and is is able to beat Rin in a guitar match. The two get along well, often teasing each other in a good-natured manner. Outside of that, he can be seen spending free time with KAITO.

In 25-ji, Nightcord de.'s SEKAI, the Empty SEKAI, Len is very child-like and shy, and he has a tendency of becoming frightened when confronted or questioned by the other inhabitants of Empty SEKAI, with the exception of Miku who he is very comfortable with. He tends to hide behind Miku to avoid facing the other characters directly. The two have a relationship akin to a pair of siblings, with Miku appearing to take the role of an older sibling to Len.

During the Deadly Sins of Evil event, Len portrays a servant named Allen who works for the princess. As brought up in an area conversation, he is the only servant of the princess, and the castle is low on staff because people fear that they might be beheaded. The selfish princess often praises Allen for his work, claiming she wishes the other servants were as good at their job as he was. He is very dedicated and loyal to both his job as a servant and his highness, even if it means he must become evil. For more information on Allen and Evilious Chronicles, please read the Evillious Chronicles Wiki.

Len's appearance and looks are modeled after his V2 design made by KEI, who also made the V2 designs for Miku, Luka, and Rin. He has blue eyes and short, yellow hair, tied back in a ponytail and spiked, looking like a bunch of bananas. Len's outfit is very similar to Rin's, with some differences being the tie, a larger shirt, and longer, looser shorts.

Like his standard Virtual Singer attire, in this Sekai's Len has white headphones with a small microphone attached. In addition, he wears a white button-up shirt and a navy blue vest with medium-length sleeves over the button-up. He also wears a gray hoodie-like jacket — which would be suitable winter wear if it had sleeves. He wears brownish-gray cargo shorts (they aren't quite long enough to be pants) and brown boots.

He wears an orange-and-green tailed ring master suit, with a striped waistcoat, bowtie, and cravat. His orange bowtie is sparkly and has a light blue gem in the center, framed in silver. On his legs and feet, he wears knee-length harem pants, striped stockings, and lace-up boots. His outfit also employs many star patterns, such as on the side of his pants or as buttons on his waistcoat. He has his yellow-and-white headset.

His idol outfit is primarily yellow (his character color). To emphasize his status as the “Prince of the Stage”, his outfit incorporates epaulettes and a small, elegant hat that he wears on the side of his head. He also wears cuffed knee-length shorts with a diamond shaped pattern, joining the shorts trend set by his original Virtual Singer outfit.

He wears a spiked black blazer with a yellow checkered pattern, an orange hoodie, white button-up shirt, and a loose magenta tie. Additionally, He wears a black choker and three gold stars on his lapel.

He wears a white, frilly dress shirt. The bottom is splattered with grey, giving it a grimy appearance. A red ribbon is tied under the collar of the white shirt, a black band is clasped over the top of his right arm, and two bracelets with criss-crossing ropes are on his wrists and over his shirt. The collar of a black, frilly undershirt is also visible. Len is also wearing black shorts with a white stripe laid vertically and a small, black belt hanging in a loop on his right side. His left leg has a black ribbon tied to it.

Allen, Len's event character, wears a standard 1800's butler outfit with a color pallette similar to Riliane's (pale yellows and oranges), who is played by Kagamine Rin. Like a majority of the other character in this event series, his hair is neatly matted down.

Len (レン): Revealed by his voice actor to be based off of a character with a similar name (Ken) from the manga Hokuto no Ken. Asami Shimoda has also claimed that his name is based on the directional “Left” to match Rin’s name being “Right”. [citation needed]

Hatsune Miku: Friend and fellow Virtual Singer. In the Street SEKAI, his relationship with Miku mirrors that of an older sibling and younger sibling pair, as Miku has a tendency of treating him like a child, much to his chagrin.

Kagamine Rin: Len's mirror image and fellow Virtual Singer. As with most other virtual singer related media, his relationship with Rin is not clearly defined in the story. Minori explains that the "setting" of their relationship changes with the song. This statement is reflected in their dynamics across SEKAI, which tends to vary. In School and Street SEKAI, the two are shown to be quite close, but they often bicker to the dismay of the other characters. In Stage and Wonderland SEKAI, the pair retain their closeness but rarely, if ever fight with each other. Lastly, in stark contrast to the previously mentioned SEKAI, the pair aren’t shown to be close in Empty SEKAI, as Len finds Rin intimidating and stays close to Miku instead.

MEIKO: Friend and fellow Virtual Singer. In the Street SEKAI, similarly to how she regards the original cast, MEIKO acts as a sort of parental figure to Len, who is noted for his childlike characterization.

KAITO: Friend and fellow Virtual Singer. In contrast to the Wonderland SEKAI, in which Len is shown to outwardly respect KAITO, in the Street SEKAI, he is more reluctant to show it due to KAITO's offputtingly easygoing nature. Even so, he still claims to secretly admire KAITO for his skill as a DJ, becoming excited when KAITO offers to teach him how to use a sampler in his introductory event, STRAY BAD DOG event. Offscreen, KAITO and Len are implied to be on good terms, as Len often mentions KAITO after his introduction. KAITO is stated to have bought Len the shoes seen in his My Dancing Shoes! 4-star card, further implying that they're on better terms since the STRAY BAD DOG event.

Len is featured in or has an alternate vocal of the following songs: