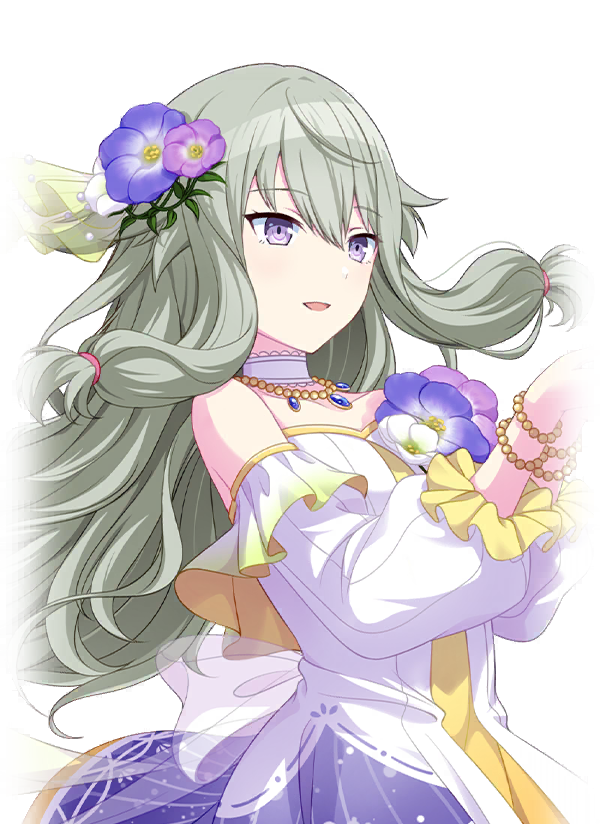 "Why am I surrounded by weirdos?"
―Kusanagi Nene

Kusanagi Nene (草薙寧々) is a first-year student at Kamiyama High School. She is a member of the musical show unit Wonderlands x Showtime.[1]

Nene joined the group at Rui's recommendation. She's sharp-tongued, but honey-voiced, with the singing ability of a budding musical star. For some reason, she refuses to show herself to Tsukasa and Emu, deploying Robo-Nene to perform shows in her place.
—Profile
❝
❞

Nene and Rui are next-door neighbors and childhood friends. As they had gotten older, Rui was the one who recommended her to join the troupe. She is a great singer and dreams of singing onstage for a musical, however, she doesn't initially appear onstage. Instead, she operates a robot named NeneRobo that Rui made for her and performs through it. After overcoming her anxiety and stage fright, she stands onstage by herself. It is mentioned that she would like to take on acting as a career.

She is also classmates with Toya.

Nene has purple eyes and long grayish-green hair, with the front strands tied at the ends.

Her show outfit consists of a sleeveless top with a pink bow and smiley-face buttons down the front over a frilly yellow-green skirt. The back side of the outfit consists of coattails and a big pink bow. She also wears a hairband with a butterfly-like decoration and knee-high leg warmers. The legwarmers and edges of her top have white fuzz. Her hair elastics are now a light pink. It's mentioned that a friend of Rui's made this outfit for her to match her NeneRobo.

When Nene is out of school and not performing, she wears a single-layer light green dress with hem-stitching near her hips. Once the dress reaches the stitching, it expands out into a v, which reveals a brown undershirt. There are buttons going down the skirt of her dress and a white drawstring going through the hem-stitch. She has a light brown sweater jacket with baggy arms and frilly ends and black tights.

Nene was once a kid who couldn't talk to other people, so Rui made NeneRobo for her. Now, she is often shown as foul-mouthed, calling Tsukasa an "idiot that wants to be the greatest star", Emu a "girl with sky-high energy that's always shouting 'Wonderhoi!'", and Rui as a "director who has his head all over the place".

She is still deeply shy of her feelings throughout her event. Sakurako ends up telling Nene she stands no chance against her, leading Nene into a frenzy and promising she will do better. She compares her self constantly againist Sakurako, making her herself to the bone. At the end of the event, she learns to "sing from her heart".

Nene (寧々): Ne (寧) means "peaceful, quiet", while the other Ne (々) has no meaning and is just used as the repetition of the kanji.

A list of characters Nene interacts with in the game.

Otori Emu: Fellow group member. Nene thinks she's a weirdo but despite that, she is shown to care for her, standing up for her when it comes to her brothers. They are close friends and Nene wants to help Emu with her issues.

Kamishiro Rui: Fellow group member. They're neighbors and childhood friends. Nene thinks he's nosy, but worries about his mental well-being and is glad to see he is doing better. Rui often helps Nene with her problems, and vice-versa. They both got inspired to participate in theatre after seeing the same play.

Aoyagi Toya: A classmate from 1-B. They get along well.

Hoshino Ichika: Their units met at Phoenix Wonderland. Ichika admires her voice and aspires to be like her. Nene was terribly shy at first, but warmed up to her and ended up offering singing lessons, to which Ichika gladly accepted.

Nene is featured in the SEKAI version or has an alternate vocal of the following songs: