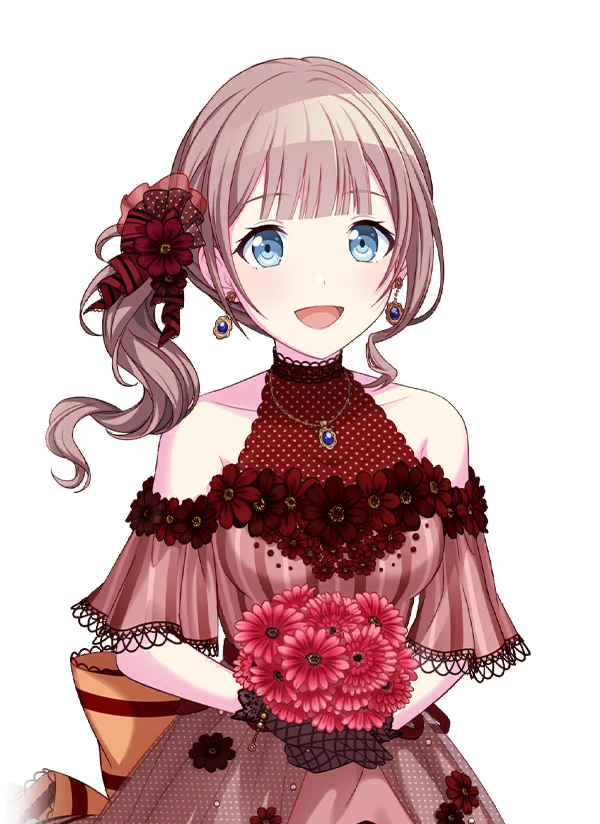 "You can’t live life in fear of being hurt."
―Mochizuki Honami

Mochizuki Honami (望月穂波) is a first-year student at Miyamasuzaka Girls Academy. She's the drummer of Leo/need.[1]

She's childhood friends with her bandmates.

This section may contain spoilers from the story, please read at your own risk!
Leo/need's drummer. She excels in both sports and schoolwork and has a kind and caring personality. Honami has been friends with her band members since childhood, but drifted apart from them during junior high school.
—Profile
❝
❞

Honami and Ichika, Saki and Shiho were friends as children. The group used to stargaze and play music, but because of Saki's hospitalization during middle school, Honami's relationships with Ichika and Shiho became strained. Despite wanting to be friends with the two, she stopped speaking to them after her classmates would call her disloyal and speak rudely about Ichika and Shiho. After Saki returns to school and they access the School SEKAI, the group slowly reunites and forms Leo/need, named after the meteor shower they watched together as children.

She's an honor student and classmates with Emu. She is also part of the beautification committee with Shizuku.

Honami has blue eyes and light brown hair worn in a side ponytail with some of her hair falling out on the opposite side of the ponytail, along with a blue scrunchie. Her voice is light and soft. Despite being 1st year, she is relatively tall. Which is enough mistaken to be adult.

In the Miyamasuzaka Sports Festival event, Honami wears a white t-shirt with two blue lines going down the sides and a text that says "1-B" printed on it, her name written below, and a pair of blue running shorts. Her hair is kept the same and she has a yellow headband.

Honami is smart, athletic and kind. She's said to be nice towards everyone, and always takes their feelings into consideration, deeply caring for them. However, this can lead her to being indecisive, and has difficulty with expressing her own feelings, worrying that people may not like her for it. She doesn't want others to worry about her, and tends to get emotional very easily. Despite this, she's always supportive of her friends, thinking of them very often; the moral of her character being "...when you try to be on everyone's side, you end up on no one's..." and that there is more than one form of kindness.

When she was in middle school, people would tend to rely on her, but due to the belief she was only trying to get on others' good sides and was simply just two-faced, she slowly but surely became isolated. Prior to joining Leo/need, she decided she would change for the better and express her true feelings from then on; the hard truth — this is her definition of kindness.

A list of characters Honami interacts with in the game.

Hoshino Ichika: Childhood friends and bandmates. While their relationship was initially strained due to Honami pushing Ichika away out of fear her other classmates would bully Ichika, they have since made up. Honami appreciates Ichika for always looking out for her.

Tenma Saki: Childhood friends and bandmates. Honami was glad to see Saki back and healthy, but felt initially awkward due to the incident that splintered their friend group. Now the two are close friends who radiate positivity.

Hinomori Shiho: Childhood friends and bandmates. While Honami once pushed Shiho away due to fear of her being bullied by other classmates, they have since made up. Shiho can occasionally voice somewhat harsh criticisms against Honami, but Honami realizes that sometimes friends need to be harsh with another to make each other better people.

Yoisaki Kanade: As a part-time job she acts as a housekeeper for Kanade's house. The two have a friendly relationship, and Kanade occasionally asks her for advice.

Otori Emu: Friends and classmates from 1-B.

Tenma Tsukasa: Saki's older brother. Though she thinks he's a good older brother, she also seems to struggle with coming up with any good qualities of his other than being nice. She still chastises Shiho for calling him a loud-mouth.

Hanasato Minori: Honami's schoolmate and friend. The two often walk their dogs together.

MEIKO: During Honami's event, MEIKO helps Honami find her courage and ability to speak up, teaching her that there is more than one form of kindness.

Honami is featured in the SEKAI version or has an alternate vocal of the following songs: