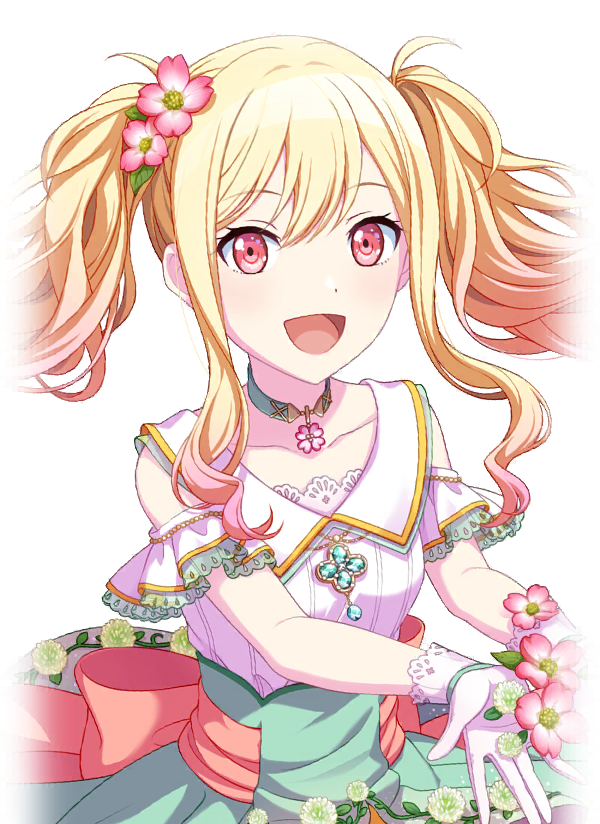 "I want to try something that the four of us can do together!"
―Tenma Saki

Tenma Saki (天馬咲希) is a first-year student at Miyamasuzaka Girls Academy. She's the keyboardist of Leo/need.[1]

This section may contain spoilers from the story, please read at your own risk!
Leo/need's keyboardist. Always cheerful, she's the funny one of the group. Saki has just returned to school, having missed much of junior high due to poor health. She was looking forward enjoying high school life and reuniting with old friends, but finds that things have become... complicated.
—Profile
❝
❞

Saki was born with a weak body. Because of this, she was hospitalized throughout middle school. Her older brother, Tsukasa, took care of her during that time. At the beginning of Leo/need's Main Story, she becomes healthy enough to return to school.

Saki was childhood friends with Ichika, Honami and Shiho. Due to her leaving middle school, she was rarely able to talk to them. When she returns, she is surprised to see that her friendship was broken. She's determined to bring the group back together and play with them, along with experiencing all the things she couldn't while in the hospital. Due to this passion, she often overworks herself to a fever.

She is also classmates with Haruka.

Saki has pink eyes and long blonde hair with pink-colored tips worn in large, fluffy twin tails. Her voice is bright and lyrical.

Her casual outfit consists of a white loose blouse covered with a cream pink sweater with a thin pink ribbon, a light blue denim skirt and black shoes with pink knee-socks.

Her unit outfit consists of a white blouse with a red striped tie and a yellow coat, a black cloth bracelet, a black skirt with yellow lining and a black leather belt with yellow lining, black thigh-high socks and black heeled mary-janes with a gold star in the middle.

During school hours, Saki pairs her standard Miyamasuzuka uniform — a light grey seifuku and a red bow — with a pale peach cardigan.

Saki is a cheerful, bright mood-maker who tries her best to never stop smiling. She is the younger sister of Tsukasa, and seems to take a liking to gyaru styles and subculture.

As a child, Saki would often miss out on large amounts of school due to her sickly condition, at one point becoming homeschooled for a period of time. During her childhood years of isolation, Saki would often experience feelings of loneliness, sometimes entering states where she could not bring herself to smile despite her brother's best efforts. Due to being hospitalized for such a long time, she has become determined to live life to fullest and not miss out on anything. However, due to this desire, she can sometimes ignore her own limits and neglect her health, a habit she is working on getting rid of.

Saki and her brother both love theme parks and their attractions. She often drags her bandmates to Phoenix Wonderland, much to their displeasure.

A list of characters Saki interacts with in the game.

Hoshino Ichika: Childhood friends and bandmates. Ichika enjoys Saki's happy demeanor and persistent smile, while Saki is glad Ichika is always there for her. Ichika often worries for Saki's wellbeing, while Saki tries to assure her that she has nothing to worry about. The two are close friends.

Mochizuki Honami: Childhood friends and bandmates. They had lost touch due to Saki's hospitalization, but have since reunited. Saki always tries to make her smile with hugs and apple pie.

Hinomori Shiho: Childhood friends and bandmates. Their relationship was once strained, but they have since reunited and become closer. Saki thinks Shiho can be too strict, but admires her skills as a musician and enjoys being praised by her.

Tenma Tsukasa: Saki's older brother. Tsukasa is shown to have taken care of her during the times when she was sick. He wanted Saki and her childhood friends to be together again, since he partly blamed himself for not preventing their falling out. Tsukasa is often showing off in front of Saki and the others, which ends in chaos, much to Saki's embarrassment. Despite this, Tsukasa works hard to protect her friendship so she can live a normal high school life. Saki admires him greatly.

Aoyagi Toya: A childhood friend of both the Tenma siblings, as their parents knew each other through playing piano. He still worries about Saki's condition, and asks her about it when hanging out with Saki and Tsukasa after school.[3]

Otori Emu: Participated in the Miyamasuzaka Sports Festival and were on the committee together. When they first met, Saki commented on how Emu reminded her of Tsukasa despite being unaware of their relationship at the time.

Momoi Airi: Saki is a big fan of Airi and often spent her time watching variety shows featuring Airi while she was hospitalized. When she ran into Airi at school, she instantly asked for an autograph and a handshake.

Saki is featured in the SEKAI version or has an alternate vocal of the following songs: