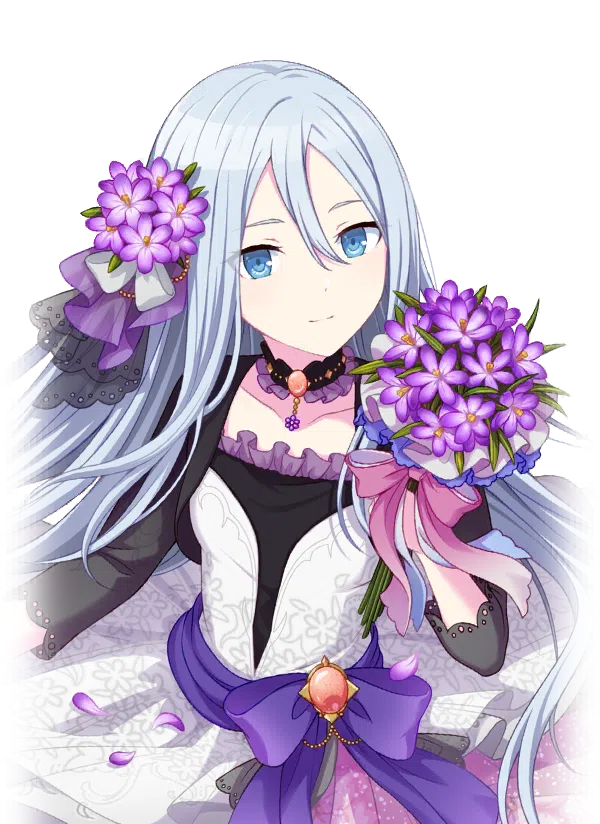 Coriander, natto, and other smelly foods

Yoisaki Kanade (宵崎奏) is a second-year student taking online classes. She is the leader and composer of the underground music circle 25-ji, Nightcord de. going by the alias K.[1]

This section may contain spoilers from the story, please read at your own risk!
Kanade was traumatized when her music inadvertently led someone very dear to her into depression. This unfortunate event resulted in her focusing on creating songs which inspired hope, and she created Nightcord at 25:00 specifically with this goal in mind. She composes songs for the group.
—Profile
❝
❞

When Kanade was young and bright, her mother fell ill and ended up passing away; her father was a musician who made a living off of commissions. Kanade's father said the she was "blessed by music", often praising her for her musical work. One day, when the young girl came into her father's office to tell him that dinner (some microwaveable meals) was ready (heated by the Yoisaki's microwave, respectfully), she saw him frustrated over a song he was composing for a contest, claiming that something was missing. She offered to help, to which he complied. After Kanade added her melody and her father submitted the song, it eventually won the competition for her part of the song, that part being placed in a commercial.

After, the father gathered new clients that claimed they wanted something like in the commercial, he could not match Kanade's melody despite his best efforts, leading him to be rushed to the hospital due to stress and overworkage. Kanade blames her father's hospitalization on herself, her child-like demeanor dissolving. She curls herself into a ball on the floor, wondering if she stopped eating, she'd be able to disappear.

Kanade now makes songs in an attempt to save at least one person and is the composer for 25-ji, Nightcord de. Kanade has a savior complex.

Kanade has blue eyes and very long, grayish-blue hair. Her fringe is tucked to both sides, save for a long section in the middle that almost reaches down to her nose, and her face is framed by a fairly long strand of hair on either side. Her voice is soft, warm and full of sorrow.

Her unit outfit is a stylised school uniform, though she doesn’t attend school, and consists of a long, puffy jacket with a gradient that starts at white and fades to an ashy dark grey. Its hood is tied at the middle with a black and red ribbon. The gradient sleeves are long enough for them to completely cover her hands in Kanade’s 3D model. In the official image for her unit outfit, she has a bulky black-and-pink wireless headset.

Her casual outfit features a jacket of similar length, but blue, striped with white, and partially unzipped. She wears a black shirt underneath and has wears short blue shorts.

Kanade has stated that her hair has grown to its knee-length because she sees cutting it to be a hassle. Similarly, she considers tying it up to also be a hassle, and, as a result, trips over it fairly often when she stands up.

Kanade’s expressions are slight, but noticeable. Her face generally stays at its resting state, as seen in her profile, but, though her mouth doesn’t move often, her eyes and eyebrows narrow and crease when she’s concerned or focused, widen and rise when she’s curious. Her mouth curves slightly when she smiles, and her eyes soften. Her body sways slightly as she moves from expression to expression.

Kanade appears to be very accepting and sympathetic towards her fellow circle members; they are grateful for her and the group she created. She'd like to make other people happy with her music as her father once did. Incredibly hardworking to the point of skipping sleep and overworking herself, she puts almost too much effort into her work. Aswell as this, Kanade will urge other circle members to rest whilst continuing to push herself to make more and more songs.

Haunted by what her music had done to her father, as the cause of her trauma, Kanade swears to make music that could save anyone, as her father had told her. Her savior complex is evident where she feels like she's failed as a musician if her music does not serve her intended purpose to help others. Determined to save Mafuyu with her music, she swears that she will continue writing, even if her talent is a curse to her.

A list of characters Kanade interacts with in the game.

Asahina Mafuyu: Fellow circle member. Kanade sympathizes with her and is desperately trying to save Mafuyu with her music.

Shinonome Ena: Fellow circle member. Kanade feels she hides her true feelings as she draws, but at the same time values her artistic skills and has said their circle wouldn't be the same without Ena's art.

Akiyama Mizuki: Fellow circle member. Kanade appreciates Mizuki's talents and friendly personality. Kanade is also grateful for them helping her remember something important, that being the childhood memory of her playing in the park and seeing the carnation flowerbed with her parents.

Hoshino Ichika: They see each other in passing at a music store, and both think to themselves that the other has very pretty hair.

Mochizuki Honami: Honami works part-time as a housekeeper for Kanade. They have a friendly relationship, and Kanade often asks Honami for advice.

Kanade is featured in the SEKAI version or has an alternate vocal of the following songs: